We've just put a new acquisition on display, a rather lovely 1:16 scale exhibition-grade model traction engine based on the Bassett-Lowke castings set. We believe it to have been engineered in around 1962, which is supported by the numberplate, GK 1962.

As well as being quite beautifully painted and lined the model has a wealth of additional fine detailing that wasn't standard for builds of the B-L kit, including wooden duckboards and accessories.

The model was in Chris' workshop for around a month before it went on display, eliciting oohs and ahhs from all who saw it. Apart from the exceptional build quality of the model, the model fills a "gap" in our collection, as the model was one of the longest-running products in Bassett-Lowke's catalogue, and featured regularly in their post-war advertising and catalogue covers, and until now we didn't have one.

We are now very happy.

Today we held the official launch party for our two-year Toys in the Community project.

The event was a "thank you" for the volunteers and interviewees, and a chance for them to meet and see the finished work, and share their experiences.

The project's outputs are available online on the project website and on the dedicated Toys in the Community YouTube channel, and the project will also be holding an exhibition on the 28-29 May, a Study Day on 11th April, and the main exhibition on 12th May, during the museum's week of 25th Anniversary celebrations.
at January 27, 2016 No comments:


As part of our emphasis on new exhibits for 2016, we've set up another radio-controlled model aircraft built by Denis Hefford in the museum lobby.

The plane is a three-engined Junkers Ju52, marked out with the livery of Adolf Hitler's personal plane in 1932 (number D-AHIT), and it's suspended overhead just inside the doorway, where it's being attacked by our two large overhead model Supermarine Spitfire fighter aircraft.

Due to its size, this model aircraft has been in storage for a long time, waiting for us to have a way to actually display it in the Museum. The lobby may not look especially huge, but its ceiling is actually three stories high, so we weren't able to put up the aircraft until after we'd invested in our own three-storey scaffolding tower in late 2015.

The first item is now crossed off our 2016 to-do list! 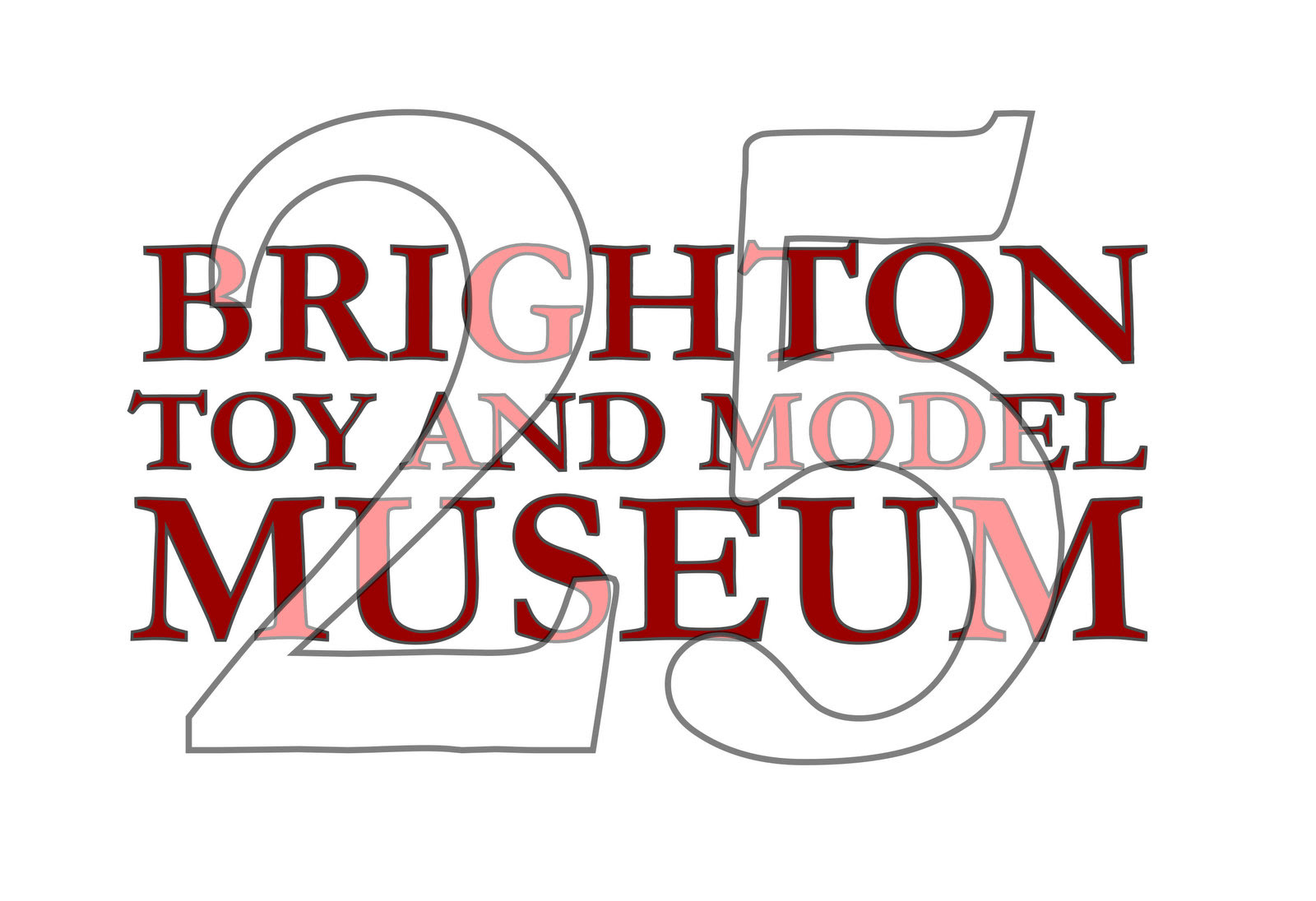 Brighton Toy and Model Museum opened at its current location under Brighton Railway Station way back in 1991, making 2016 our 25th anniversary.

The museum has come a long way since a band of friends first got together to gut a series of derelict arches under the station and create a time capsule to hold and display the cream of late Nineteenth and Early Twentieth Century toy and modelmaking.

To commemorate the year, we've been planning a series of new exhibits and display updates which will be appearing during 2016, including a number of new exhibits and display improvements, some of which that have been planned almost since the museum's inception. To prepare, we spent most of 2015 improving the museum's general background infrastructure, so that this year could be all about New Things to Look At.

Major 2016 upgrades will include:


As well as these new displays, we'll also be holding a series of anniversary year events and adding a number of new individual exhibits to some of the other displays, including the hanging of an additional large Denis Hefford model airplane in the Museum foyer and the display of a beautiful exhibition-grade 3/4-inch scale Bassett-Lowke model traction engine in the Toyshop Steam cabinet. The anniversary year also marks the culmination of our Toys in the Community project, and we'll be having a special celebration week in May with guided tours and talks.

Our big restoration project for 2016 is the exacting restoration and display of a prototype 1930s gauge 0 model of the Brighton Belle Pullman Electric train.  This is an important piece in its own right, but its restoration and public showing is especially appropriate given that the completed restoration and public running of the real Brighton Belle is expected to take place this year.
––––
Outside the museum, 2016 is also the 175th anniversary of Brighton Station (built 1841), and should see the inauguration of the i360 observation tower at the site of the old West Pier.
at January 01, 2016 No comments: