Music Night - An Evening of Talent and Fun

As part of its 'Victorian Christmas' celebrations, the Museum hosted an evening of music and singing on Sat December 9th. Several of the guests turned up in full Victorian costume, adding to the festive spirit of the occasion.

Superbly led by Roy Nash and Noel Dumbrell, it was a wonderful evening of singing and instrumental talent, complemented by a full licensed bar and lavish Victorian Christmas decorations. All present enjoyed themselves and we only hope that we can manage to organise another musical event early next Spring!

A sad goodbye to Claire, our curator

As of the 30th December 2006 Claire Eden will no longer be the Curator of the Toy Museum due to funding for her post running out! Here is a message from her to all the Museum visitors, patrons, Friends and staff:

" I have had a wonderful time at the Museum, and I have really enjoyed setting up the new exhibition and events programme Making History Fun, helping to prepare the Museum's Accreditation application and trying to keep up - and where possible improve on - the Museum's fantastic reputation. It will be extremely sad to go, but I know that the volunteers and staff are more than capable of carrying on the work that I started. Thank you to everyone who has made this experience so wonderful, from visiting the Museum as a one off to long standing members! I wish you all a very Merry Christmas and a Happy New Year,
Goodbye!
Claire "

On Sept. 28th, 2006, the Museum and its Education Team joined eb4U, the Mayor and the residents of Whitehawk in celebrating the completion of THE WHITEHAWK CHILDREN'S CENTRE. Museum staff provided a hands-on toy demonstration for visitors during the opening.
at November 28, 2006 No comments:

GCSE art students from Falmer High School have been hard at work preparing for a very special exhibition at the Museum.

The joint project is part of the 'Big Draw' and the exhibit will open on Tuesday November 28th and will run thru January 2007.

Email ThisBlogThis!Share to TwitterShare to FacebookShare to Pinterest
Labels: Exhibitions

Members of the Train Collectors' Society were in the Museum running their own trains (in addition to all of our own vintage trains), making it a truly special event for people of all ages.

The idea was to make 'Time to Change' reflect that period when the railways were grouped in 1923. The huge variety of locomotives and rolling stock running on our spectacular '00' and '0' gauge layouts for this special event was a sheer delight.
at November 25, 2006 No comments: 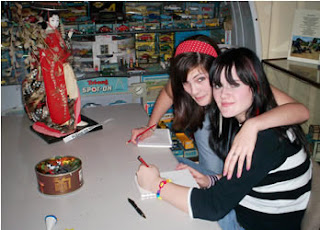 Brighton Toy and Model Museum is delighted to announce that the Museum has secured a new partnership with local secondary school, Falmer High School. 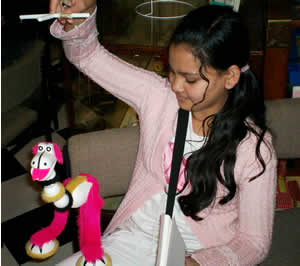 Students from Falmer's GCSE Applied Art group will be working closely with the Museum Education team to produce a Big Draw exhibition within the Museum. 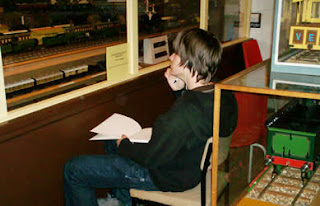 We are delighted to be working with Falmer High School as we feel this relationship will be mutually beneficial, and offer exciting new opportunities for all involved. We are also pleased to be involved more directly with our local community and the future generations.

Please check our website for regular updates on how things are going!
at November 01, 2006 No comments:

Students from Falmer's GCSE Applied Art group will be working closely with the Museum Education team to produce a Big Draw exhibition within the Museum.

We are delighted to be working with Falmer High School as we feel this relationship will be mutually beneficial, and offer exciting new opportunities for all involved. We are also pleased to be involved more directly with our local community and the future generations.
Please check our website for regular updates on how things are going! 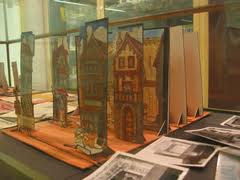 October 2006 saw the launch of two special exhibits. The first is titled 'THE FAMILY THEATRE' , featuring hand-painted sets, scripts, catalogues and memorabilia relating to a family which presented juvenile drama plays at home during the late 1950s-early 1960s. 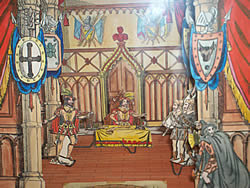 We are also proud of our new display of figures titled 'THE JOY OF LITTLE PEOPLE'. 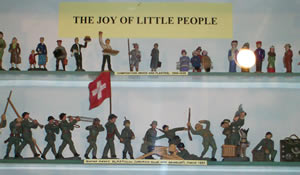 Our current exhibit, 'BLERIOT TO CONCORDE' features a fantastic collection of model aircraft, illustrating the history of modern flight.
at October 01, 2006 No comments:

October 2006 saw the launch of the Museum's exciting year-long campaign called 'Making History Fun'. The aim of the campaign is to make history more accessible to people of all ages and backgrounds.

The Museum is very busy planning a full programme of events and activities to run throughout the year. There will be musical evenings, performances (to include: 'An Audience with Rudyard Kipling'), special exhibitions, a Quiz night, speakers and a special Smuggler's event.

The programme and details about events appear in the new 'Making History Fun' section of this website, which has gone online to help keep the public informed.

Museum Director Chris Littledale and the Mayor during the Launch
at October 01, 2006 No comments:

Many claim that it was the best Music Night we've organised yet!!! Enthusiastic guests packed the Museum on Saturday April 22 to enjoy a high-energy evening of first-class folk music. The event raised much-needed funds for the Museum.

Paul Downes - Recognised as one of the finest guitarists on the folk scene. Eight albums with bands, three highly acclaimed solo albums and over one hundred and fifty session credits have still left time for Paul to play every concert venue, theatre and festival in Britain, plus many tours in the USA and Europe with, among others, Pete Seeger. "Wonderful...Magnificent throughout," said Melody Maker.

Terry Masterson has been a giant of the local folk scene for over three decades. His wonderful ballad singing will leave you in no doubt why.

Alan White - While he was resident of the famous Boggery Folk Club in Birmingham it was Alan who gave Jasper Carrott his first break and they remain close friends. Alan toured the folk circuit extensively with his riotous comedy act and recorded two albums. A rare chance to see him performing locally.

Among the other artists appearing were the multi-instrumental duo Ray Chandler & Barry Ruffell, Pete Cartlidge & Stuart Reed of The Taverners.

Special thanks to the musicians and to our generous sponsors:
Everyone's been asking when we hope to have the next one!
at April 23, 2006 No comments:

Museum on the telly!

Look out for the Brighton Toy and Model Museum on the telly!

On the Car Booty programme our very own Peter Palmer and Museum are featured. They should be on our screens in March on the BBC.
at March 01, 2006 No comments:

" ON TRACK: Claire Eden isn't just playing with trains, she has to count them, along with hundreds of other treasures at Brighton Toy and Model Museum. Claire, the museum's new curator, is compiling a database which will help it bid for Lottery cash. Full story on Page 7. "


" TREASURED TOYS AND A MOUSE

Brighton's Toy and Model Museum has started recording its treasured 3,000 items for the first time, thanks to a £1,600 grant to buy new computer equipment.

She said: "Until now there was nothing recorded - just a few scraps of paper written about 15 years ago stuck in the drawer. There were a few attempts to make an inventory but nothing completed."

The charity-run museum in Trafalgar Street is one of few remaining in the country. Claire, 23, said a proper database would bring the museum national recognition and enable it to apply for Lottery funding.

She said: "Our main goal will be to create a resource room where people can do research into toys. We have a lot of specialist books and information which we would like to make available on site."

The welcome handout has come from the South Eastern Museum Archives and Libraries Council.

Claire said school parties visited the museum most days and a resource centre would be of a huge benefit to them as well as toy and model enthusiasts.

Former curator Andrew Woodfield has stepped into the role of education officer to move the museum forward.

Among other plans are improvements to the museum and more exhibitions.