On Saturday 2nd February at 7pm Ian Gledhill will present a talk about Magnus Volk and the Volk’s Electric Railway which has been running along Brighton Seafront for 129 years! The other not less remarkable creation and probably the most recognisable was the Brighton and Rottingdean Seashore Railway (Daddy Long Legs). Ian had a diverse career in tourism and travel, music, television and theatre, as well as railway engineering. He currently divides his time between directing operas, helping to support Volk’s Railway and giving talks to the public. You can purchase a ticket in advance for £5 at the museum or for £6 on the door.

2013 is the 150th anniversary of the birth of British toymaking pioneer Frank Hornby.

Hornby didn't just invent Hornby Trains: he also invented Dinky Toys, and he got his start when he invented Meccano, originally as a way of making it easier to make toys for his own children out of strips of cut-up biscuit tins.

Hornby patented the idea behind his modular metal construction kit in 1901, and the system evolved to become "Mechanics Made Easy", an educational system for teaching engineering principles to children, before being given the more catchy name of "Meccano".

Meccano Ltd. grew to become an international company with headquarters at Binns Road, Liverpool, and Hornby became a millionaire and a Member of Parliament.

The Museum has just been awarded a grant by the Heritage Lottery Fund to help it to celebrate 2013 as Frank Hornby Year. The grant will pay for a full-time Project Officer for a year to rewrite and dramatically expand our online resources for Meccano, Dinky Toys and Hornby Trains, and to set up a project website at FrankHornby150.org to hold a directory of participating groups and organisations, and a calendar of their 2013 events. We'll also be holding events focussing on Frank Hornby Week (13th-19th May 2013), launching the programme at the 2013 ModelWorld exhibition in February, and doing some other Very Cool Stuff including some very exciting things on the Museum floor with new technology to allow visitors to access information from the Museum floor.

As well as its Meccano exhibits, the Museum has what we believe to be the best collection of early Hornby Trains on public display anywhere in the World (in Arch Four), and this grant will let us finally install information systems that can do these collections justice. We're also hoping to bring in some new guest exhibits for 2013 to mark the anniversary.

More information to follow as these exciting developments unfold ...
at December 17, 2012 No comments:

On the 7th December the museum was transformed into a different world by the "Magic Lantern" show. The Victorian predecessor of the film camera, called the Magic Lantern, was projecting images of Christmas, local scenery and other themes, accompanied by the Pepper's Ghost Company's quartet, who were reading  poems, playing music and singing along to some truly enhancing music.

During the Victorian times, this was a highly popular leisure activity for the nobility and common people alike. Travelling companies would tour the country, showing amusing images and scenery from across the land in theatres. Public institutions would often have their own one and even families that could afford a simpler version would use the lantern to entertain themselves during friends and family gatherings. 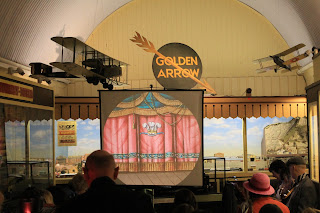 The beauty of magic lantern is that it not only projects still images but it projects the images that are also moving, fading and so on, making the experience similar of the film.

The museum was packed to capacity with the audience transfixed by the images and everyone felt like they had been transported into the Victorian times. The museum already has a magical quality about it and the light effects bouncing off the glass cabinets only added to that.

Mulled wine, made to a Victorian recipe, was served during the show.

Email ThisBlogThis!Share to TwitterShare to FacebookShare to Pinterest
Labels: events

Jazz Night at the Museum 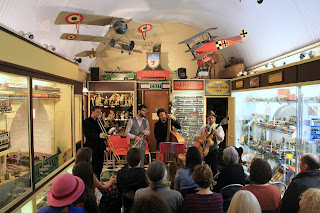 On Sat 24th November, the Museum had a great night of Jazz. A popular Brighton band, Harry's Tricks, played some amazing music to a captivated audience. Mike (lead guitar and vocals), Dmitri (trombone), Dave (base) and Dan (trumpet) filled the arches of the Museum with their music, putting life into the displays. Their music was lively and engaging, soulful and touching, something for everyone.

Some of the guests broke into a dance and one could feel the Museum come alive with all the gaiety. To add to the audience's pleasure, our very own "Tigger" joined in and sang some breath-taking French melodies. Tigger has many years of experience in singing with bands across France. She and the band gelled together so well, taking the audience into a sort of a trance.

A bar was open till midnight and kept the "spirits alive". There was a barrel of bitter from Harveys, which seemed to go down very well with the guests. And hey! No wonder of wonders, we managed to track down each and every glass.

To top it all, Chris gave us all a rare treat by running some of the special trains, including the Coronation Scot. That was unexpected and the crowd gathered around the tracks, watching the rare locomotives and  carriages rocking along on the rails.

All in all, a fantastic evening! 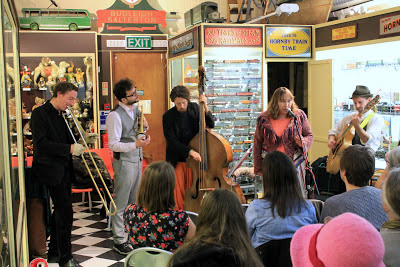 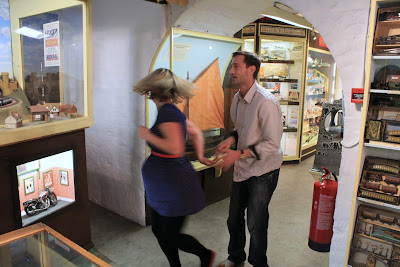