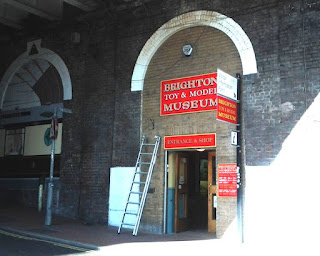 The Museum's external signs were starting to look a bit faded, so we've taken them down and partially repainted them. They're now back to their old glossy red and glossy selves.

The Museum likes to reuse and recycle materials wherever possible, and during the refurbishment it turned out that the larger sign had been painted on the back of an earlier version, dating back to the early days when we had our old name. So we took a quick snap of the back of it before the board went back onto the wall.
at April 09, 2012 No comments:

Email ThisBlogThis!Share to TwitterShare to FacebookShare to Pinterest
Labels: signage

We've now assembled a display based on the doomed luxury ocean liner RMS Titanic, in Area 25.

In case you've missed the slew of centenary TV programmes, April 2012 is the one-hundred-year anniversary of both the ship's maiden voyage, and it's sinking. Titanic set sail from Portsmouth on 10th April 1912, and sank with the loss of over fifteen hundred lives on 15th April 1912.

As well as an array of memorabilia (including some White Star crockery and glassware), modellers might be interested to know that we have two large Titanic models on display, based on the largest commonly available kits and sets of plans – a ~thirty-inch 1:350-scale version that has been produced over the years by a number of different manufacturers (recently reissued as a special centenary edition by Minicraft), and an even larger ~forty-three-inch, 1:250-scale model, based on the Hachette/Amati plans.

Also on display is a copy of Daisy Spedden's "Polar the Titanic Bear" book, written by a Titanic survivor for her son, which recounts the events through the eyes of the child's Steiff polar bear. Alongside the book is an original ~1910 Steiff polar bear from the Museum's soft toys collection – this is the only original Steiff polar that we know of that is on public show, and one of the very few originals that still exists. There's rumoured to be another bear (in better condition) in a bank vault somewhere, but that's the only other surviving original that we know of.

The Titanic display will be on view until this autumn.
at April 03, 2012 No comments: