A Pie And A Pint And Museums At Night 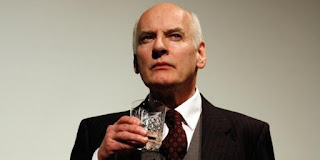 We just wanted to say a huge ‘thank you’ to Higgidy Pies and Bedlam Brewery for the generous donations they’re making for our Museums at Night event, Two Halves of Guinness.

The idea for a pie, a pint and a performance came from Trevor Littledale, the star of the show (and our founder Chris’ brother) and since we all at the museum love to watch a show with a pie and a pint in our hands, we thought this was fab!

The show centres on the well beloved actor Sir Alec Guinness’ introspection at the time of the release of Star Wars. Sir Alec himself was in no way fond of the movie, and worried that it would be his lasting swansong. He dreaded being remembered for a part he had no liking for. He’d had a career which had lasted several decades, and included roles such as the entire D'Ascoyne family in Kind Hearts and Coronets, the eponymous Man in the White Suit and Colonel Nicholson in Bridge on the River Kwai, the role for which he won his first Academy Award.

Being immortalised as a mystic who spouted “florid, breathless and embarrassing” lines was something that made him “shrivel up a little.”

Guinness had converted to Catholicism in 1956 and tended to consider the role of a Jedi mystic something of a fraud. He said in an interview with Talk magazine while promoting his autobiography ‘A Positively Final Appearance’ that it was his idea to kill off Ben because: "I just couldn't go on speaking those bloody awful, banal lines. I'd had enough of the mumbo jumbo."

The show Two Halves of Guinness is Brighton Toy and Model Museum’s Museums at Night event. In the past we’ve had great fun with Museums at Night. It’s an opportunity for museums to do something a little out of the ordinary to appeal to people who might not necessarily be interested in museums and galleries to come along and get involved. One year your correspondent bought up all the Barbies and Sindys he could find in every charity shop so that we could make dresses, give them makeovers and make them a little more relatable.

It’s important that we thank our sponsors too. What would a pie, a pint and a performance be without a pie and a pint?

Higgidy Pies are a local pie company who make a variety of delicious pies and pastries, and they’ve given us enough pies (both veggie and meaty) to sustain the hungriest of audience member for the evening. (check out their website, they’re not stingy with their recipes for all kinds of pies, pastries and confectionary either!)

Likewise, Bedlam Brewery, again a local company making fine bitters,ales, and lagers who’re helping us out by letting us have crates of the stuff to share with our visitors on the night.

We really are grateful, as it’s contributions like these that let us do things that would otherwise be outside our scope thanks to expense and inconvenience. You guys are great and we’re looking forward to putting on many more events with your help.

To book your ticket, please follow this eventbrite link