A Very Tasty Exhibition Has Come To The Museum


What do Alice in Wonderland, trains, the circus, old birds and buckets all have in common?
They're all biscuit tins in a new exhibition at Brighton Toy and Model Museum. 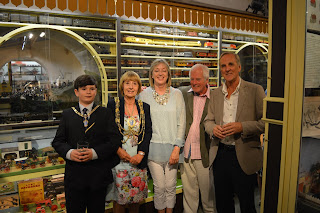 On Thursday we officially welcomed the Sarah Leather Biscuit Tin Collection to Brighton Toy and Model Museum. Among the guests were many of our friends and patrons, our mayor, staff and volunteers who all work so hard to make the things the museum put on work so well.

The biscuit tins, collected by Sarah Leather, are a superb insight into a bygone era of marketing and industrial production. Tins were manufactured by the same companies that were producing tin plate toys so the natural conclusion was to make containers that could be used as toys. Several advances in production techniques, including offset litho printing directly onto the metal meant that hard wearing, durable, colourful pieces could be designed whereas previously tins would be decorated with printed paper designs. Leather’s collection features several examples of the earliest of these tins, including Alice Through The Looking Glass tins which were (and then weren’t) endorsed by Lewis Carroll himself.

The evening itself was enjoyed by all present. Not only did we have a chance to meet the collector’s family, friends but our mayor, Lynda Hyde and her grandson Max, were also present. Chris took great joy in not only showing off his collection of O gauge models but giving them a run along with his inimitable impressions of the sounds of the trains. 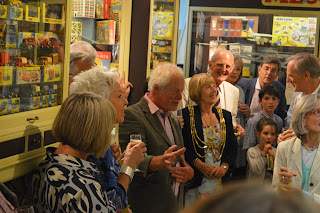 The tins in the exhibit represent some of the most interesting and unusual containers ever created. Take for example the behemoth Chocolate Manner Wein train, a model steam engine with trucks which totals over two feet in length, or the McVitie and Price bird, a design that looks very much like a design for a tulip inspired vase, but with a bird’s head used as a lid. The technical difficulties inherent in producing such a complicated form can only be wondered at, and the fact that all this design and technical know-how was thrown into producing a means of transporting confectionary without it getting damaged or spoiled shows how much importance was placed on producing something durable, interesting and fun for the consumer.

We hope all those who attended had as good a time as we did hosting the event and look forward to welcoming everybody here again when we have more events and exhibitions in the museum. It shouldn’t be too long until we are able to bring more news of fun events as our 25th anniversary is just around the corner and we’ve already started to plan special extravaganzas that we hope will really bring the museum to life. But more on that closer to the time.

Again, we’d like to thank our generous lender’s family for letting us put the exhibition together, it’s drawn a lot of attention already and we hope it attracts many more people to the joint delights of biscuits and tin toys!
If you want to read a little more about the exhibit, check out the write-up we received on our local BBC news site.