Our Huge Bequest of Trucks, Trains and Collectible Cars

Every now and then something truly extraordinary happens at the museum. This week we were asked by City Council staff members to help out with a house clearance as the resident had been a keen toy collector and they wanted to ensure that the collections went to the right place.

Godfrey Barnes, a Brighton and Hove resident passed away in September and had built up a large collection of Corgi trucks and Hornby trainsets over the years in hopes that the resale value would cover the expenses of his funeral. Unfortunately, Mr Barnes died before those sales could be realised, leaving his housemate and fellow collector Mr Sewell, with a vast collection of toys which needed to be taken care of.

So Many Cars And Trucks!


What do you do when you have a trove of toys that is piled from floor to ceiling in several rooms in a house? Well, Amanda Harvey, Tenancy Sustainment Officer at Brighton and Hove City Council approached us at Brighton Toy and Model Museum to help out by removing, appraising, selling and re-using this amazing collection, a task we were glad to do!

Amanda Harvey and Mr Sewell discussed the problem of the toys and their redistribution and decided that it would be best to get in touch with us. They agreed that the toys would be put to their best advantage if they were cleaned, appraised and then either sold on to collectors to raise money for the museum. Some of those which are especially interesting or important will be kept within the museum, and those which can neither be resold nor exhibited will be used in the museum for educational purposes as they show the way gears, pulleys, clockwork and springs work when applied to tasks.

Next Comes The Sorting, Appraising and Cleaning.


The next step now though is for museum staff to sort through all the cars, trucks and trains to find the best items which can be sold on as genuine collectors’ pieces, exhibition quality items, and toybox treasures. This is no small task as you can see from the photos, we have been given many good quality boxed items, but we also have items that, while still in their boxes have suffered, then other toys which are unboxed, gathered together loose in storage boxes.

Once the collection has been separated it will be cleaned up and displayed, put up for sale, or used in the museum for educational visits and Playdays when our local kids can use them for the purpose for which they were made, having fun!


The collection includes the afore mentioned Hornby train sets, it also includes an arch full of boxed Corgi trucks, many of which have the liveries of well-known hauliers (these include familiar names such as Eddie Stobart, Carter’s Fairs, Bannerman, Westfield, Volvo, Pickfords and Boddingtons) . Other toys still in their boxes come from such names as Dickie and NewRay, there are even some Lledo and Bburago models of classic sports cars and vintage tourers.

Once we’ve had a chance to go through all the toys that we were lucky enough to get from Mr Barnes we’ll be updating you to let you know what we plan to sell. 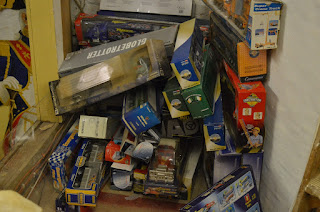 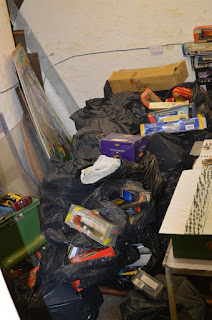