Ray Harryhauseun, The Man Who Brought Gods to Life

Many kids my age, 44 next month, will remember sitting and watching with awe the monsters, gods and titans created by Ray Harryhausen. The sixties, seventies and eighties were a golden age of stop motion animation, and most of that was driven by the films that Harryhausen worked on.

And you’ll be astonished by the range of movies that feature his work. Of course there are the Greek epics that everyone will be familiar with, Clash of the Titans, Jason and the Argonauts, and the Sinbad movies. These features brought a whole new dimension to the Swords and Sandals genre. No more would you have Roger Moore galloping around scrubby bits of Italy, France and Yugoslavia clumsily yet successfully flirting with the Sabine Women. Now the Heroes would do battle with unimaginable beasts, skeletons that have grown from dragons teeth and great bronze statues brought magically to life. 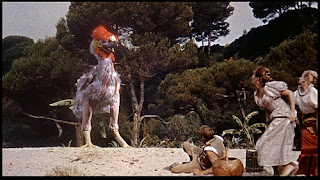 Harryhausen started working on blending animation and live action in the 1940s with the Mighty Joe Young, the story of love, deceit, and a giant gorilla. Later he would work on classics such as The Valley of Gwangi, where cowboys meet dinosaurs for the first time and try to put them into a Mexican circus, then the sequel to 20,000 Leagues Under the Sea; The Mysterious Island in which escaped prisoners of the American Civil War find themselves on the eponymous island fighting against internal divisions, prejudice, and fearsome freaks of nature, including a giant bees, crabs and a chicken.

Not only did Harryhausen create these fabulous puppets, he also painted many of the mattes and backdrops which make the films that he worked on so convincing. The techniques he used seem obvious today, but when you look at many of the films which feature early CGI, they are as clunky and unconvincing as any wire and foam model, if not more so (Star Wars Episode IV Special Edition, with the scenes tacked on in the 90s, I’m looking at you…) . 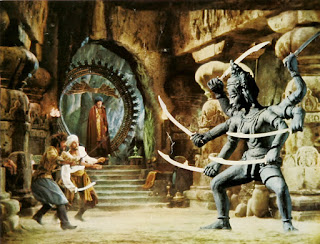 If you were one of those kids who used to get so excited about each new release of a Harryhausen film, you probably wouldn’t have even known his name, but you’d know the movies when you saw them. The films he worked on were so much more than simply vehicles for his outstanding, ground-breaking special effects. They were story led, and the creatures featured added to the story, they were genuine characters without being gratuitously inserted or showboating.

These films have become classics and are still enjoyed by whole families, and the techniques Harryhausen developed are being used again as CGI, although it is better than it was, still doesn’t quite match up to using models and maquettes, especially where budgets are a major consideration. These films are also being recognised as art today. Not just within the genre of film art either;  Harryhausen is enjoying an exhibition at the Tate Museum of Modern Art, where his puppets and paintings of backgrounds and mattes are being displayed until the 19th of November. Not only does it feature the props that were used in our favourite films, it also features some of his creative art. It should come as no real surprise that Harryhausen also worked in bronze, creating beautiful masterpieces in metal, as well as their on film analogues. You’ll also see the relationship from the genuine architecture of ancient cities, its representation in classical art, and how that informed his dioramas as well as the mythical menagerie which heroes, immortals and fair maidens would very frequently get squashed or eaten by.