Save Mareira Arches! How Can You Play Your Part?

Brighton has many landmarks, all of which will bring back particular memories to any of the people who live in, or have visited the town since it became a popular tourist destination, thanks to George IV, all those years ago. 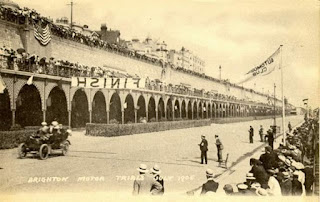 Some of those landmarks are permanent, such as the Corn Exchange and Pavilion. It’s hard to imagine Brighton being anything like the town it is without that Sussex take on Oriental and Indian architecture. The Georgian buildings, designed in a regency style that lent so much to the classical  Roman and Greek architecture that the great and good would have been familiar with from The Grand Tour.

Brighton is Famous for its Piers


Other attractions have turned out to be less permanent. Brighton’s first pier, the Royal Suspension Chain Pier was built in 1822 and thanks to its construction, Brighton became the busiest cross channel port in Britain. When other harbours along the coast became more popular Brighton became less important for shipping, but pleasure cruises and seaside excursions still kept people coming back.

The Chain Pier suffered significant damage in the 1860s and thanks to the attractions such as a bandstand and entertainments provided by the West Pier, it became less and less significant as a popular attraction. Finally it succumbed to the elements in the 1890s when it was blown down in a violent storm.

The West Pier is itself now a popular tourist attraction, despite having been wrecked by storm and fire over the years. It started falling apart in the 1970s and what was left of the timber was burned in a fire in the 1990s. The skeleton of iron still remains an iconic image of Brighton, and despite its continued decay, still attracts tourists. And starlings.

The Antique Sits Alongside the State of the Art


Other newer attractions continue to bring people from all over the country and beyond to Brighton. The i360 takes visitors hundreds of metres into the air to look down on the city, and we’d just got used to the Brighton Wheel when it was taken away to a new venue and replaced with a zip line which opens this year.

Two other structures, each dating back to the Victorian period, stretch along the seafront toward the marina. These being the Volks Electric Railway, the oldest serving electric railway in the world which has undergone significant reconstruction over the past years and the Madeira Arches. The Madeira Arches are often overlooked and underappreciated by visitors and resident alike, however they offer a unique service. Giving a shaded covered walkway under which it’s possible to watch the many rallies and motor events which take place along Madeira Drive while also supporting a raised platform upon which it’s possible to stroll along its half mile extent from the Aquarium along to Concorde 2.

These arches are painted in the familiar green that all iron street furniture in the city carries, but it also has latticework in cream which reflects the architectural features of the Pavilion. Each arch is decorated with a head at its apex, alternating between representations of Neptune and Aphrodite along its entire length. Today it looks as if the arches could be going the same way as the Chain Pier and the West Pier. After many years of being taken for granted, several sections of the terrace have become unsafe and the iron used in their construction has suffered badly from the action of the weather, accelerated by the salt air.

Save the Madeira Arches!


For the past year the arches have been fenced off while their decay is monitored. There was a plan to demolish a large section, if not all of the arches, however, another construction firm said they could rebuild the damaged sections for less than the cost of demolition. But that was some time ago and not much has been heard of any progress since.

Which is why it’s so pleasing to see a crowdfunding campaign begun to save at least three of the 151 arches. Saving the entire length of the arches will cost £24m, however, to rescue three of the arches, to preserve them for future generations and to show what could be done with the infrastructure investment, the crowdfunding campaign aims to raise £432,484. At time of writing, the campaign has been going for 3 days and £110,053 has been promised by 366 backers.

If you’d like to become a backer, and donate as little as £2 to the restoration project then follow the link to the Visit Brighton’s Spacehive Save Madeira Terrace Campaign to keep a little bit of Brighton’s history alive.