There are many things going on in Brighton at the moment. A lot of regeneration and renewal, which is all a welcome sight. 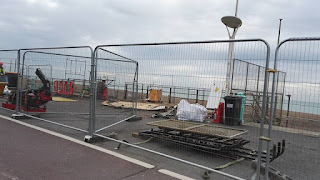 The i360 proved contentious, a lot of people think it’s great, many others are disappointed by it and would have loved to see something different for a modernised seafront. But love it or hate it, you can’t argue that it is indeed iconic and has been a welcome boost for business in the area. You just have to walk along the prom to see the restaurants are all bustling at all hours.

Another programme of renewal which hasn’t received so much attention is the demolishing and rebuilding of many of the structures used by Volk’s Electric Railway. 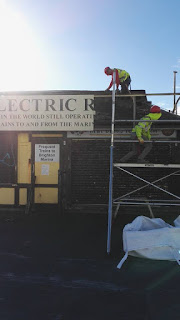 Volk’s Electric Railway, as I’m sure you’re aware, is the oldest electric railway in the world, running from the Palace Pier to Peter Pan and Black Rock every summer since 1883. Over those years the buildings at the stops have come and gone and workshops have been built where the trains can be repaired and maintained to keep them in perfect running order for holiday makers and residents of Kemptown to commute along the seafront.

So, just as the rolling stock needs attention, so do the infrastructure that supports them, and that is why most of the buildings on Volk’s Railway property have been pulled down over recent weeks.
The first building that was brought to our attention as having been pulled down was the workshop next to Peter Pan. It’s true that the building was far past its prime and the options were clearly to overhaul it completely or rip it up and start again. It had been patched up so many times that a new start on the site really was the best option. Then we also noticed that the ticket booth at the Aquarium Station had gone too.

It’s unlikely that anyone will be sad upon seeing the buildings removal. And the contractors are already at work creating a substructure that will support a new Aquarium Station and visitor centre at the pier end of the line telling of the history Volk, the current electric railway, the seashore electric railway that today we call the ‘Daddy Longlegs’ and the other contributions and influence that Volk made toward electric powered railways, tramways, streetcars and vehicles throughout the rest of the world.

Construction on these projects to build a new station, visitor centre and yard/workshop will be quick, it's scheduled to be completed by spring 2017. That means that there should be plenty to see and do when the railway reopens for the summer season.
at November 19, 2016